I can’t get rid of my big goofy smile this morning.  Opening my camera bag for the first time I see that Chris has hidden a card inside.  With humorous references to Star Wars (of course) he tells me he loves me and to enjoy my vacation.  So far, so good… this is a fabulous way to begin day two.

Leaving River Bend Hot Springs behind, we start our 90 minute drive to Mesilla.  Along the way, we stop for lunch at Sparky’s Burgers, BBQ & Espresso in Hatch, NM (chile capital of the world) for a “World Famous Green Chile Cheeseburger.”  A long line of customers wait outside for a seat and it’s not even noon yet.  Not to worry, though, there are plenty of visual distractions to keep us occupied.  The place seems to emerge out of nowhere and doesn’t fail to entertain with its theme-park-ish atmosphere, both inside and out.

Over the front entrance of Sparky’s 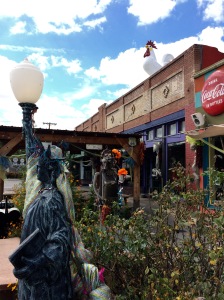 Part of the front entrance to Sparky’s 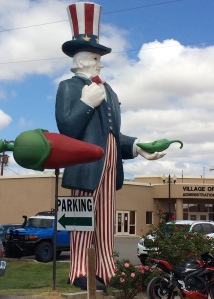 Parking next to Sparky’s 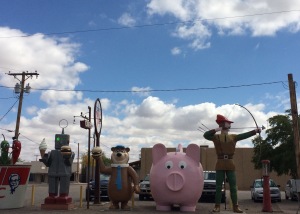 Across the street from Sparky’s

Named the third best burger joint in America by TripAdvisor, I have high expectations for Sparky’s.  I’ve tried a green chile cheeseburger once before and failed to see what all the hype was about.  Once inside, I want to order one of everything on the menu given that I’ve had nothing but snack bars and a margarita in the past 24 hours.  Instead I go with the award winning burger and a side of sweet corn with Hatch green chile & onion.

Jones is a vegetarian so IF she ordered a burger, I would never tell.  She shares a sip of her drink order with me – the El Rojo (Ro-Ho) guajillo chile & mango – and now I wish I had ordered one, too.

I’ve always thought you could judge a burger by how many napkins you need.  If that is an accurate measure, then this is the best burger I’ve ever had.  Sloppy, melted cheese and beef juice are dripping down my chin and hands and my brain temporarily shuts down as I experience what a real green chile cheeseburger is supposed to taste like.  I decide it’s a bit like sex:  if you don’t enjoy it you’re not doing it right. 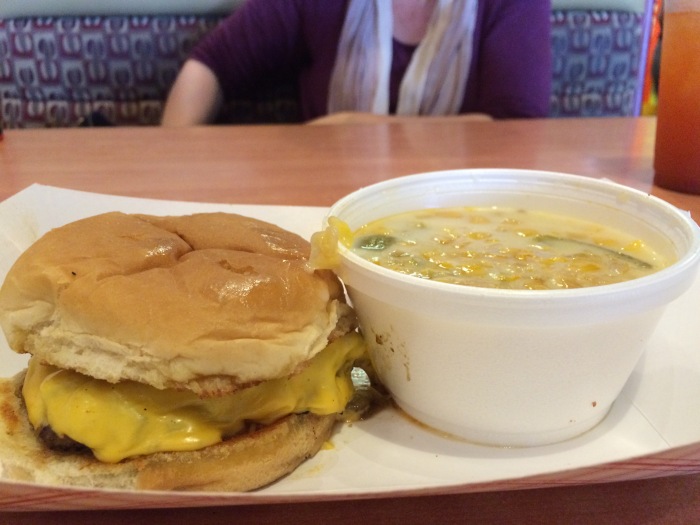 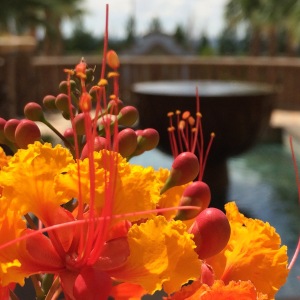 On the grounds at Hotel Encanto

Now fully satiated, we complete the drive to Mesilla and shed our bags at Jones’ place (well, really M’s place but Jones lives there now, too) and head back out for a tour of nearby Las Cruces. Jones wants to walk around at Hotel Encanto de Las Cruces.  It seems like an odd thing to do until I see it for myself.  If we weren’t staying at Jones’ place tonight this would be a great alternative.  With “design and artwork that reflects Spanish and Mexican Colonial history and tradition,” as noted on the website, there is a seemingly never-ending supply of unique visuals.

Leaving the hotel to drive around Las Cruces, Jones starts to notice homes for sale.  Unlike me, who might look at a real estate listing once a month, this seems to be a hobby of hers.  We tool around some increasingly nice neighborhoods (and increasingly pricey by Las Cruces standards).  As we gather more and more listing sheets, I begin to realize she’s trying to convince me to move there.  I guess her preceding questions should have been a clue:  “Hey, do you think Chris would like it here?  Do you think you would ever leave the DC area?” etc., etc.  My answer is “no” Chris probably wouldn’t like it here.  Aside from the heat there are way too many spiders.  However, the homes are beautiful and much more space than I could ever afford in northern Virginia.  It’s fun to fantasize about having a wide-open sky and mountain-scape as my backyard but it’s just a daydream… for now.

In the middle of our drive we take a wrong turn and end up at this dead-end, reminding me of the road to Nambé, a small town outside Santa Fe.  If the name sounds familiar, it’s probably because Nambé, the company, which was founded in the town in the 1950s, manufactures very distinct looking “silver” serveware and home décor.

During our 2006 trip, while driving from Taos to Albuquerque, we had decided to stop and check it out. Being a bit off the beaten path, we were traveling on a two-lane road which then became a one lane road.  Jones had just finished jesting, “Well I think we’re fine as long as it doesn’t turn into gravel,” at which point it turned into gravel and then, quickly, into just plain dirt.  The dirt road narrowed and wound through a series of small, quirky, beat-up homes.  One I distinctly remember was covered with sugar skulls and other off-beat artwork.

A few rather odd-looking locals stared at us in confusion from their yards and, deciding we were lost, we stopped to ask one of them for directions.  We cracked the window apprehensively and asked how to get back on the road to Nambé.  With squinty eyes he peered at Jones, then looked at me, then back at Jones, and said, “You two want to get to Nambé?  You need to go back to the highway!”

It doesn’t seem that ominous in writing, but picture Jack Nicholson in that scene from A Few Good Men saying, “You want the truth?  You can’t handle the truth!”  and you get a sense for the tone of the conversation.  Clearly we didn’t belong there.  And to complicate matters, the entire electrical grid had gone down in Taos that morning preventing up from gassing up, so we were about to run out of gas as well – something that is not a big deal in the DC metro area but totally undesirable (and a bit unnerving) on the back roads of New Mexico.  So back to the highway we went and we never did get to Nambe.

Now after finding our way back to Jones’ / M’s place, we head right back out again to St. Clair Winery & Bistro.  We struggle to pick out the reds we want to taste and joke around about how pretentious some of the descriptions can be:  fruit-forward; redolent of a profusion of aromas of coffee and cherries; complex varietal flavors of cherries and blackberries, with a promise of herbs.  The wine pourer (I’m not sure what you officially call someone who pours wine for tastings) secretly agrees.  While she opens a bottle of cabernet to “breathe” she tells us about a couple who came in one time knowing nothing about wine.  She poured some red and told them it had to breathe, then turned around to grab something from the bar.  When she turned back around she found them blowing into their wine glasses.  Okay, I guess I don’t feel like THAT much of a wine-tasting newbie but I still can’t explain what “fruit-forward” means.

For dinner, we meet at La Posta de Mesilla with the elusive Jeanette (a.k.a. Jenny Clay / Clay Art), a local artist who seems to disappear every time I’m in town.  Last week, Jones sent me a picture of Jeanette in an effort to prove she actually does exist but I refused to believe it until now.  She is exactly like I thought she would be:  assertive, “creatively” dressed, and a bit of a goof-off.  Okay, maybe a full-on goof-off.  She tells us about her upcoming semi-impromptu trek to Santa Fe to sell her art and have cookies and coffee for dinner, and for a minute I wish I could be more like her.

M, Jenny Clay, Jones and me

Back at Jones’ / M’s, Ancient Aliens plays on The History Channel while M shows me pictures of her recent trip to Mesa Verde National Park… and then some flowers… and frogs… and children of people I don’t know… and… zzzzzz.

Morning brings a trip to Burger Time for some breakfast burritos.  The trip comes with a warning from Jones about how odd the place is.  One of the Yelp reviews nails it:  “To sum up…this place is really weird. The food is good, the prices are high, and the vibe is bizarre. It’s almost as if they are trying to discourage customers with the high prices and the weird vibe…” (click here for the full review).   To top it off, there is no cash register at all on this particular day – just a thick layer of greasy dust on the counter where the register once stood.  It seems their one and only register is out for repair so they do the math for our order with pencil and paper while discussing with each other how their friend just violated his probation, all the while treating us more politely than I can ever remember being treated at any fast food establishment.

On the way “home” we couldn’t resist stopping to see the World’s Largest Chili Pepper (yes, I know, it’s Chile not Chili – but that is the official name the owners gave it).  And just to top off the strange morning we drove by a random dude jumping rope badly in the middle of the street while his friend took pictures.

“World’s Largest Chili Pepper” – when taking a selfie, do not stare directly into the sun – it will produce unattractive facial expressions

Now comes the long, desolate drive to Carlsbad Caverns.  Bags packed, we hit the road once again for day three.

The burritos, by the way, were delicious – lightly pungent; subtly sweet; strong vegetal taste that approaches artichoke territory; hints of smoke; and dare I say… chile-forward?