“I also had to learn that losing myself in my work was not dangerous.”   ~from Virginia Valian’s essay ‘Learning to Work’

We jumped into class with our weekly critique.  The task was to post a couple versions of last week’s 10-minute still life studies on the wall, offer quick comments on what we liked and didn’t like, what we learned, and then open up to feedback from our instructor (Mrs. C) and classmates.

Regarding a green apple I had painted, I offhandedly remarked, “…and for the accent, I slapped some red paint on with a palette knife and called it done.”

Detail of the prior week’s still life.

What came out of my mouth next surprised me.  “I felt my ‘self’ go.  There is no place for ego in art,” I said matter-of-factly.

Mrs. C laughed casually in agreement and said, “Well there are some huge egos in the art world, but you’re right, ego has no place in the process of creating.”

We moved on to the next classmate and the next, until everyone had their brief moment in the spotlight.  I offered up my thoughts here and there but that one statement I had made – the thought that came out of nowhere – stuck with me through the rest of the class.  I suspected that I’d clumsily stumbled upon a universal truth.

The remaining 2-3 hours were spent whirling through what Mrs. C referred to as “Many Mini Simple Studies,”  with three main objectives:

Working from 10 simple ‘found images’ we were to paint three versions of each composition.  This meant we had about 5-10 minutes per ‘version’ to sketch, make color and technique choices, and put brush to paper (I’m an accountant – I can do math).  Utterly terrifying to a control freak like me.  I would typically spend 30 hours on one oil painting or graphite drawing.  The thought of churning out 30 paintings in a few hours horrified me.  It made me desperate.

In 5-10 minutes per painting, we were forced to decide on:

To get us jump-started, we were given an exercise where each of us would sketch one of our found images to watercolor paper.  Next, we would pass the sketch along with the original image to the person beside us who then had 30 seconds to do something – anything – put some paint on, make one decision, one small mark if that’s all that was needed.  This continued until each image had been touched by all 15 of us and was then returned to its originator.

Created in less than 10 minutes by 15 different people.

What emerged was, in some cases, phenomenal.  Some were a bit disastrous.  But the ones that were good were SERIOUSLY good.  The time constraint imposed a sense of desperation that left zero room for overthinking.  There was a certain freedom in it.  I couldn’t quite verbalize the energy I was feeling until one classmate summarized, “not my child, not my problem.”  That’s it!  We all cared because we were contributing to the creations, but we didn’t care as much as we would if they were 100% our own.

There is no place for ego in art.

If we could carry this energy into the 30 many mini simple studies, the day would be a success.  Easier said than done.  Like the first exercise, the ‘versions’ ranged from disastrous to some of the best art I’ve ever produced.  Sometimes, I would finish one version before starting another.  Other times, I worked on all three versions simultaneously, adding some white masking here, a drop of water there, dry brush with intense color as a desperate afterthought.

One of my favorites. White masking fluid forces you to think backwards. Not easy to do in 10 minutes. 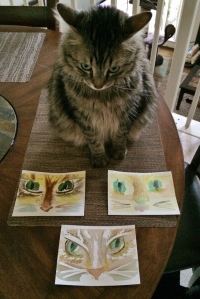 Newt was unimpressed with my renditions of her, and I agree with my boyfriend’s assessment that v.2 “looks like a cat from my nightmares.”

I had no roadmap, no instruction book.  Just instinct. For much of the time I was not thinking at all.  When I did think, I was mainly wondering if this wasn’t a metaphorical representation of our lives.  Our selves.  That these ‘versions’ of each image were like us – works in progress with infinite possibilities.

A couple of classmates gave in to the time pressure, spending way too much time stuck on one version.  A couple others freaked out, “What if I don’t get them all done?  What if they look like shit?”  One was just plain stubborn, “This is not how I like to work.”

I stuck with it.  Me.  The control freak.

For the second time this month I just said, “fuck it.”   I’m not giving in to my ego just because one of these versions has the potential to look like a hot mess.

Now, more than ever, I know this class is reminding me of something I had almost forgotten – we shouldn’t freak out or give up just because one version of ourselves, at one point in time, looks like shit.  We are works of art.  Works in progress.  Many mini simple studies.  We can work on various versions in succession or all at once.  But there is no place for ego in art.

Dry brush & sponge. Thick use of color. Kind of boring.

Less work than v.1 but I like the ‘hint’ of mountains (a.k.a. atmospheric perspective) and the use of white masking on the tree.

And what was the end result?  The folks who resisted the time constraints produced art that was overthought.  The ones who freaked out didn’t get much done at all.  The stubborn one produced nothing.

And me?  I got a little bit closer to a pure version of myself I can always sense but never quite reach.  The version where desperation forces me to leave my ego at the door.  The one that scares me because in order to get to it, I must release my need for it. 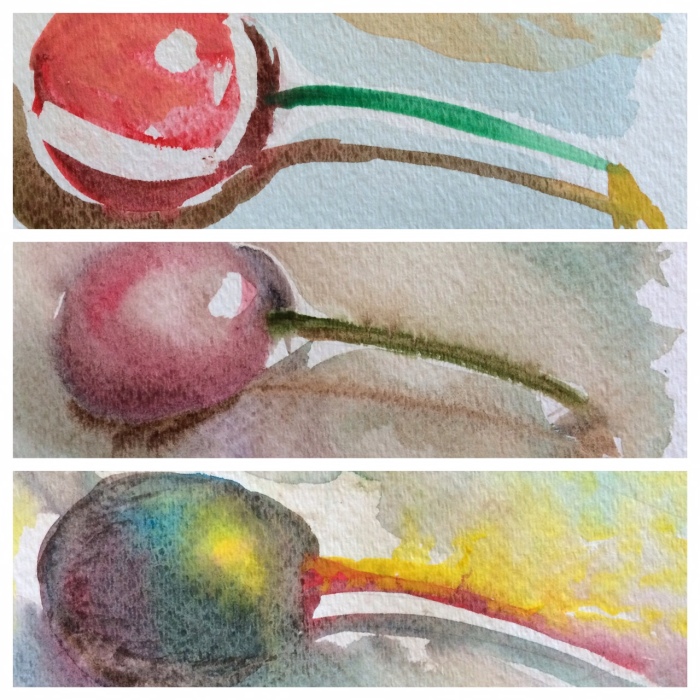 My favorite of the day. Detail of three versions. One “dry on dry” with white masking. One “wet on wet” with muted colors. One “wet on wet” with atypical colors. I almost decided not to paint this image at all, thinking it was too simple. With these, I cared much less about the outcome. I was just having fun.

I still have that little voice that tells me this is dangerous.  If I leave my ego at the door it might not be the same when I put it back on. Maybe I like my ego the way it is.  My ego keeps me safe. It convinces me I have everything figured out. It tells I am the best thing since sliced bread.  Maybe I like the current version of myself.  Maybe I don’t want to change.

“Wed on wet” technique with both muted and intense complementary colors.

That devilish ego. It lies to me.  There is so much beautiful possibility in the unknown.  With three versions of each image now completed, I can see that it’s okay to try on different colors, quickly change at the drop of a hat, risk creating a version that is less than perfect.  Surrender to desperation.

There is no place for ego in art.